Why Carry A Gun? The Answer Might Surprise You.

I’ll begin with a conversation I was having recently with a good friend. We were standing by my fireplace sipping a glass of wine when the subject of firearms came up. My friend, we’ll call him “Dan” mentioned he had seen pictures of me on Facebook competing in IDPA (International Defensive Pistol Association). Dan, whom I served with on active duty in the Marines, informed me that the only firearm he has is a .357 Magnum his Dad passed down to him. He then casually mentioned that he doesn’t carry a firearm. He said flatly, “I’ve never needed one.” I replied that the same logic applies to seat belts. I haven’t been in a wreck since October of 1997 and yet I have worn a seat belt thousands and thousands of times and for thousands of hours since that day. Because in October 1997 that seatbelt saved my life. Thus, I will continue to wear my seatbelt because we never get an opportunity to pick the time we will need it. He then went on to say that he felt like people who carried a firearm were in some small way looking for a fight. I disagreed. I explained that because I have a smoke detector in every room of my house and a commercial-grade fire extinguisher in my home doesn’t mean I hope my house catches on fire. I have them so that I am prepared and my family is protected. How is carrying a defensive tool to protect your loved ones from harm any different? 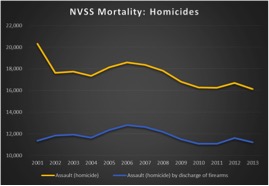 We live in a dangerous world were homicides are a daily fact of life. In fact, according to the National Vital Statistics System (NVSS), most homicides are committed by an individual with a firearm. To be precise, during the last 13 years, 153,144 Americans were killed by a firearm during a homicidal assault.[1] Even with alarming homicide numbers such as these, less than 5% of the U.S. population are concealed carry permit holders.[2] Thus, more than 95% of the U.S. population are out in public without the one tool necessary to defend themselves against a murderer armed with a firearm. When we look closely at NVSS homicide data we find that in 2008, 71.3% of homicides were precipitated by another crime.[3] Meaning a crime was in progress at the time that the victim was killed.

Given the data above one would assume that more people would carry a firearm for personal protection but as I have shown, they do not. I am convinced that the primary reason most well-intentioned Americans do not carry a firearm is because they truly believe it is the duty of our sworn law enforcement officers to protect them. That would be nice. If only it were true. The actual job of the American Law Enforcement community has nothing to do with protecting us.[4] As a former cop I can tell you that the duty of our nation’s police force is to enforce the law. Nothing more, nothing less.

The second most likely reason most Americans do not carry a firearm is because they truly believe that carrying a firearm is dangerous. There is a kernel of truth to this assumption. A misused firearm can be extremely dangerous.

Are firearms inherently too dangerous for us to even consider carrying them? Let’s look at 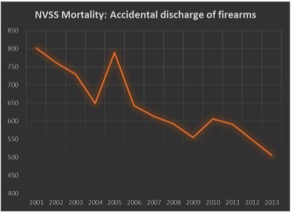 the data from the NVSS’s 13 year mortality study. According to the NVSS an average of 42,044 Americans die as a result of motor vehicle accidents every year.[5] And according to the same NVSS mortality study, an average of 645 Americans die every year as result of firearms related accidents.[6] Using available statistics from multiple sources it was determined that the percentage of increased risk between firearms and vehicles is… you may want to sit down for this one: 2,916.53%.[7] Yet most Americans drive their vehicles very day without a second thought and cringe at the very idea of carrying a firearm.

Perhaps there is a third and final reason most well-intentioned Americans do not carry a firearm. I believe this fourth reason is the fear of being forced to pull the trigger and end another human being’s life. This is a very important consideration. If you do not feel like you could; under any circumstances, take the life of another person, then carrying a firearm will not be an option for you.

As for me, I began carrying a firearm professionally as a U.S. Marine more than 26 years ago but I did not begin carrying a concealed handgun for self-defense until my state made it legal back in 1995. Since that time I have carried a firearm both as a sworn law enforcement officer and as a private citizen. During the intervening years I have given a lot of thought about using my weapon on another human being. Someone that was intent on harming me or someone I love. My attitude concerning the defensive use of a firearm is best expressed thusly. ‘No one has the right to kill or harm me, no one. No one has the right to kill or seriously injure another person against their will, no one.’

I love my wife, children, family and friends. I love them deeply. To kill me is to harm my family by depriving them of my earning potential and my ability to love and personally care for them. As such, I believe that an attempt to kill or harm me is a direct attack against them as well. The character William Munny in Clint Eastwood’s movie Unforgiven says it best, “It’s a hell of a thing, killin’ a man. Take away all he’s got, and all he’s ever gonna have.” Hearing this statement for the first time gave me chills. It still does. It made me realize that if someone were to take my life they would be depriving me of everything. They would forever rob me of my past, present and future. I would lose my wife, children, friends, dog, cat, horses, home, car, career, life savings, future plans, dancing with my daughter on her wedding day, grandchildren sitting in my lap, vacations, saying goodbye to my parents, growing old with my wife… Everything. So, I made a conscious decision many years ago to deny anyone the opportunity to seriously harm me or my family. I will not go down gently. I will fight. And I will survive.

The decision is now up to you. Will you fight or will you become an accomplice to your own murder. Self-protection is your responsibility and only you can make the decision to go armed.

The fight is coming. Are you ready?

[4] Time and time again over the past thirty plus years the U.S. Supreme Court has stated emphatically that, “A State’s failure to protect an individual against private violence generally does not constitute a violation of the Due Process Clause, because the Clause imposes no duty on the State to provide members of the general public with adequate protective services. The Clause is phrased as a limitation on the State’s power to act, not as a guarantee of certain minimal levels of safety and security …” (Oyez). We see our Supreme Court use this language in rulings such as DeShaney v. Winnebago County (1989) and Castle Rock v. Gonzales (2005).

[7] In the U.S. there are 115,610,216 households (U.S. Census). 42% of those American households have firearms (Agresti). Of the total households (115, 610,216) roughly 91% of those households have vehicles (Madigan). Given these numbers you have a 0.0005% chance of dying each year from living in a household that owns firearms. Additionally, you have a 0.015% chance of dying each year from living in a household that owns vehicles. Of course, possess doesn’t necessarily indicate usage, nor has the number of U.S. households been a constant during the past 13 years of the NVSS study. But just follow me for a moment. From looking at the percentages above, the risk associated with firearms and vehicles seems negligible. Which in many regards is an accurate assumption. This is why we think nothing of jumping in our SUV and heading off to mall for a Starbucks. However, when one applies the percentage of increasing risk differential between firearms and vehicles the two numbers look startlingly different. The percentage of increased risk between firearms and vehicles is: 2,916.53%. Do the math for yourself. To calculate percent difference, you need to follow these steps: You need to calculate percentage increase from (accidental firearm deaths in households that possess them) 0.000005 to 0.000152 (accidental vehicle deaths in the households that possess them). First Step: find the difference between the two numbers. In this case, it’s 0.000152 – 0.000005 = 0.000147. Second Step: Take the difference, 0.000147, and divide by the original number: 0.000147 / 0.000005 = 29.165256709. Last, multiply the number above by 100: 29.165256709 x 100 = 2,916.53 %. (Marshu).To