Train Fast to Get Fast

Watch this video and tell me if you think I was going “slow and smooth” or if I simply pushed and tried to go fast.   Triple Nickel

Now, I would guess most of you might guess that I was trying to go fast.  In addition, I had a shot I pushed slightly over the head because I pushing as hard as I could go and trying to find a speed where I could get hits and break the Triple Nickel record.   Granted, I have trained to the point where I can safely and successfully push to that speed, but I did not get it by simply trying to be smooth.   Being smooth (and subsequently fast) is a byproduct of training repetitions.   That said, the speed with which you train is the speed you will perform (does that make sense?).

I posted a video on Instagram the other day which also gets linked automatically to Facebook.   The video was of a steel stage that I shot during a recent Chatanika, Alaska at a steel match.

My reason for posting was because I have continued to hear the same thing over and over again posted online, a phrase that goes something like this:   “slow is smooth and smooth is fast.”  I wanted to make the point that smooth was a byproduct of great skill, not something to be specifically practiced.   Meaning, when I practice I do not simply try to become smooth.   I work on mastering the skill, which in the end looks smooth and is likely very fast.

This particular article is an expanded list of the concepts of that I was trying to get across in my original post, which of course was way to short to actually get my point across.  The post was well received, but after posting I got multiple comments some in agreement and others in disagreement trying to argue a point.  It became obvious that those arguing might misunderstand my point, and I felt like I had something to offer for those that want to learn something.

While I am not one who is in the habit of getting into “internet” arguments (not worth my time), there are cases when I hope to be able to open someone’s mind to a different method of thinking and help them practice/shoot better.   It is my job, and in the case of this post, I hope to open some minds and guide those that might follow what I have to say.

First, in relation to performing any technique at speed, please understand this: there’s no argument with those of you that make the point that the basics must be practiced at a deliberate (some might say slow) pace first.  You are completely right, I agree.  As a full-time trainer now for almost 15 years, I, or anybody that instructs anything would be an idiot to say that the best way to practice is to perform the skill really fast before the technique is actually ingrained and learned.   That was not my point at all.  In addition, safety is key, so everything in this article falls within the normal safety guidelines, keep that in mind when you are trying to do anything fast.

My point is that after each of us get beyond that basic level with the technique, and it is somewhat ingrained 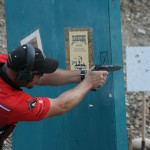 At some point we must simply begin to push our speed to the next level. It will not come naturally.

correctly, we must strive to push ourselves to go faster if we choose to be able to perform the skill with any amount of speed.  Let me give you a little more background on this.   At one time some more midway in my career when I was already quite good I had another really good shooter give me some great advice.  This shooter who was considerably better than me at the time told me that I needed to push outside of my comfort zone and make myself go fast.  After his comment, I disagreed because I felt that control was everything, and being able to perform while completely in control meant everything to me.

But the reality was I never actually learned what my limits were!  I never pushed and reached my failure points.   I never actually tried to push the techniques that I was using (were talking about competitive context here) and perform them at my fastest speed.   So I decided to give it a shot in my practice sessions and at matches.   I worked hard and started to push myself.   What do you think happened?

I failed!!  But guess what, those failures and those mistakes started the learning process again! Remember I was already quite good at that time, but pushing and forcing myself to find my failure points caused me to find subtle areas that I could improve upon.

Failing caused me to design index points on key handgun manipulations like the draw process, were few small key index points allowed me to consistently draw my gun much faster than I had before.  After small changes, I could hit the gun as fast as I possibly could move my hands and arms and I still have a successful draw and first shot hit.

Believe it or not your brain learns the pace and timing that you practice a technique.   I can’t tell you how many students I’ve had that heard and followed some old phrase like “smooth is fast” or something like that. When they come to my classes they’re incredibly smooth.  They’re very good shooters and can come out of the holster smoothly and present the gun to the target and get good hits, but guess what, they’re slow! 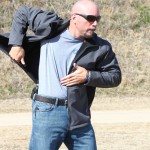 A full speed concealed draw process will be faster if you learn proper technique, then make yourself try to push that skill to the next level (in terms of speed).

When I tell them to simply do what they’re doing the exact same way but try to go faster they begin to push and often gain 25% in speed almost immediately by simply having someone push them.  Then I give them subtle hints to improve their techniques and they jump another 5-10%.

After the match and class we had together he told me that the new statement had become an epiphany to him.   His comment was “it’s amazing.. why didn’t you tell me that before!”  He said he believed he gained a second on each of the stages just by being aggressive.   Remember aggressive translates to trying to go fast.    To make yourself move your body aggressively is fast.

You may wonder why I did not give him the modified statement earlier, but the reason I hadn’t given him that specific performance statement before was because I didn’t use it myself.   I myself change my old statement to the new one when I discovered this secret.

My epiphany was when someone told me “Mike go faster” and it worked.   This caused me to learn to be aggressive each time I trained and competed.   My performance statement reminds me to always be aggressive, yet I maintain a level of control in train and constantly remind myself not to be so aggressive I’m not using good technique.   The key is to push to the edge and find out where it is!

Those of you that read this article and choose to take what I’m saying and apply it and try it will gain speed.  I guarantee it.   Those that choose to continue to say some old saying like slow is smooth and smooth is fast as blah blah blah blah blah will get just that.    You’ll continue to be slower then you can be so if to learned to push to the next level.   Trust me on this, I had to trust someone and you’ve got to trust me.

Be Safe – Be Aggressive – Give fast a shot

6 Responses to Train Fast to Get Fast