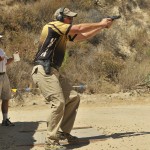 Shooting the outer limits stage at the Steel Challenge, one where movement is required.

Steel Challenge – The Steel Challenge (SC) is the world speed shooting championship normally held in California.  This is an all steel match with 7 stages and 5 targets on each stage, all consisting of round or rectangle steel plates set up at distances from 7-35 yards.  The object of SC matches is pure speed and the goal is to hit all 5 targets as fast as possible, with the stop plate last, which records a time for the entire run.  The shooter takes either four or five runs, with one throw out run per stage.  The times are added together and that is the score for the stage.  While pure speed is the goal, accuracy fundamentals are also tested in SC matches because each time you miss a piece of steel, it takes a half second or more to make that shot up.  For this reason, it is critical to get a hit with each shot if at all possible.  Participating in SC matches will greatly increase your skill in all fundamental shooting skills, but will specifically increase your draw speed and target acquisition speed. For more information on Steel Challenge matches, visit: http://steelchallenge.com/. 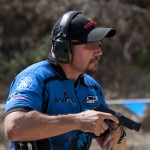 Midway through the draw process. The draw is CRITICAL if you want to do well at the Steel Challenge.

Key Needs: Draw and target transitions – Two skill areas will become very important when training and competing in SC matches – draw speed and target transitions.  On each stage you will do 4 or 5 separate runs, each requiring a draw (from the surrender position).  Each of the stages will also require you to shoot a target once, then move the gun (acquire) to the next one and shoot it.  This means that you will do more than 30 draws and over 100 target transitions in the match.  The better you are at those two things, the better your overall time is.  Let’s say for example, that you are doing a draw at about 1.5 seconds average and you decrease your time by a mere two tenths of a second (.2).  You would decrease your match score by more than six seconds.  This is a huge decrease in time and any professional would give big money for a decrease of that amount.  As far as acquisitions, lets say your normal transition time is three tenths of a second (.3), and you decrease that by a mere half of a tenth of a second (.05) to a transition time of a quarter second (.25) per acquisition.  You would decrease your match time once again by more than six seconds.  Add these two together and we are talking about a decrease in total match time of more than ten seconds (around 11-12).  This is a HUGE improvement in a SC score.

Training Tips – Training for the SC is simply a matter of working on the two key skills that I have already listed (draw and transition), and figuring out what order in which to shoot the stages.  While training on the stages you will want to break each one down, so you can improve your ability to shoot it on demand well.  This requires you to understand and place your focus on certain areas.  Here is what I try to do for each stage in the Steel Challenge, and these things should be incorporated in your training:

Break each stage down for-