As many of you know, I have an association with Armscor (sponsorship), and have full access to the line of Rock Island Armory handguns for testing, training, and use in competitions.   I have been shooting and testing their line of single stack and high capacity 19/2011s for several month.  This review will cover the Rock Island Armory 2011-A1 .40 caliber.   This particular caliber is not offered on the website yet, but will be soon. 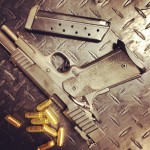 This gun is one that I have set up for the USPSA single stack division.   It is an upgraded model built for me by Rock Island Armory’s master gunsmith, Arnel Bernardo.   While it is a customized gun, the stock configuration of the gun from the factory is very close to the same gun.  My personal preferences were to add an Ed Brown ambidextrous thumb safety, a Dawson fiber optic front sight, and a Techwell magwell.  The trigger on my gun breaks at a clean three pounds, which is a bit heavy for a competition gun.   I will probably adjust the trigger weight down to around two pounds in the future.

I have shot the gun in several practice and testing sessions so far, and as of yet have not had a problem or malfunction of any kind.   The gun shoots great my initial groups shot offhand from ten yards were all under two inches.  My review is as follows (using the R.E.A.P. breakdown):

The Rock Island line of guns continues to impress me.  The company makes no bones about the fact that their guns are not high end custom guns, and the price reflects that.  I have shot the guns I personally own without cleaning for a few months now, and they continue to run without malfunctions.   If you are in the market for a lower priced, yet quality 1911/2011 type gun, I strongly suggest you consider a Rock Island Armory gun in your search.   And as usual, those of you that know me will not be surprised when I recommend spending less money on a gun, and more on ammunition and training.  Once you get your Rock Island Armory gun, make the investment in some ammunition and get a full training program to follow and take your skills to the next level.  I hope to see you on the range!