Guns, guns, and more guns!  I finally have my hands on all of the 19/2011’s made by Rock Island Armory that I want to test and write about. 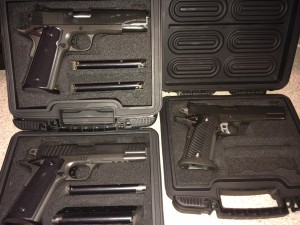 This blog will be an introduction to the guns, and I will test each and post about them in future articles.  First, full disclosure, I am sponsored by Armscor/Rock Island Armory.    That said, while my contract stipulates that I use Armscor Ammunition whenever applicable (basically if they make the caliber I need I have to use it….which by the way is an incredible deal since the ammo is awesome!).  What I DO NOT have to do is shoot the Rock Island Armory (RIA) line of guns.  It is completely my choice.  As you would expect from me, the testing of these guns will be done objectively, with no punches pulled.

For those of you that do not know much about RIA, the company is based in the Philippines and has been around for many years.  The current President/CEO Martin Tuason is motivated and aggresively dedicated to quality.  One thing that really stood out to me was RIA’s warranty and commitment to replacing guns that broke…get this, even if they had been owned by multiple generations of owners!!  I spoke to him about his goals for the company at a recent event, and heard his strong desire to produce quality, affordable, and company backed 1911’s (and soon a production type carry gun….) at a level larger than his competitors.  Having spent some time speaking with him, I see big things in the future of this company!

The guns…. Okay, lets get some models and nomenclature out of the way.  First, some of you might think of the 1911 and 2011 different in that the 2011 is a wide body gun such as the STI/SVI and Para frames.  A Rock Island Armory 2011 is not necisarily a high capacity frame, just a part of the “Tactical 2011 series.”  The designation A1 and A2 separates the gun line between a single stack and high capacity gun.  Let me introduce you to the guns I have :

M 1911-A1 CS- This is the compact 9mm 1911, and this gun is actually the gun I just won the IDPA Back Up Gun National Championship with. 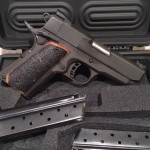 M 1911-A1 FS- This is the full sized 9mm 1911.  This particular gun has the addition of a fiber optic sight of my choice, and a techwell magwell and grips.  Otherwise, it is stock. 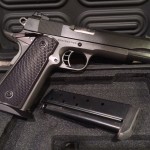 Tact 2011- This is the full sized .45 cap single stack.  It has a rail (for lights and lasers), comes with a low profile magazine well (stock), and fiber optic sights.  In addition, this gun comes with very aggressive grips and ambidextrous safeties.   This gun is stock. 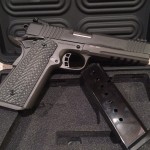 Tact 2011-A1- This is the full sized .40 custom single stack.  This gun is customized with a fiber optic front sight, ambidextrous safeties, and a techwell magwell.  It is a custom gun built for me to use in the USPSA single stack division. 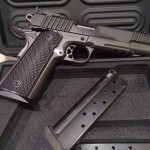 Tact 2011-A2- This is the full sized .40 custom high capacity gun.  This gun is customized with a fiber optic front sight, ambidextrous safeties, and was modified for me so I can use STI magazines in it. 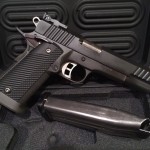 So far the only gun that I have shot extensively is compact 9mm which for now is around 2500 rounds without a single malfunction.  In addition, during an Armscor commercial, I shot the .45 2011 extensively, but in fairness did not objectively test the gun.   In the coming weeks I will be testing each of the models above, and pushing them to their limits.   I will post more about each in future blogs, so those of you that have had an interest in these great guns will have some information in which to base your decisions on.  More to come..!