If you remember Part 1 of this article I covered general principles of all types of activator targets, and how to shoot swingers.  This article will cover sliders and bobbers.  (taken from Your Competition Handgun Training Program) 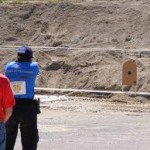 The Bianchi mover. Shooting moving requires that the shooter lead the target based on speed and distance. (Thanks to Julie Golob for the picture.) 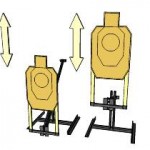 The target on the right is a swinger, and on the left is a bobber. They are shot much the same, by waiting for the ambush point.

In part three of this blog, I will cover the rest of the moving targets you might encounter!   And remember, the best way to learn to shoot them is to find them at your local club and practice on them.