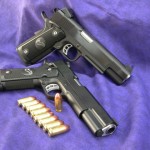 These are the first two GP (general purpose) models Kevin built after USSA built it’s custom shop. Unfortunately these two were lost by the airlines!

Okay, I admit I am a bit biased.  In this post I wanted to tell you about my friend and custom gunsmith Kevin Toothman.   Before anyone gets offended though, the “greatest 1911/2011 gunsmith” title was not officially awarded…it’s just my opinion.  I would not want to slight other great gunsmiths out there that read this post.   There are several REALLY good ones in the U.S. that I know of.

But this post is about mine, Kevin Toothman.   Kevin currently works for the U.S. Shooting Academy in the custom shop as their full time custom 1911/2011 gunsmith.  In addition to working on 19/2011’s, Kevin also has some heavy duty skills when working on pretty much every other handgun design, including revolvers (I can’t wait to get my Ruger GP 100 tuned by him!). 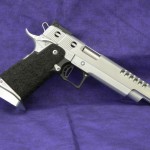 (deceased) was planning to build the U.S. Shooting Academy in Tulsa OK.   Tom had big visions and Kevin was the originator of those visions as the idea man behind this big shooting academy (that has now hosted every major match and training event in the nation).   Kevin and I developed a relationship when he built me my first custom gun, a five inch 2011 in .40 S&W that would be used in the U.S.P.S.A. limited division.   I can remember getting the gun for the first time when Kevin finally completed it (it took a bit of time….as you know craftsmen are SLOW).   It was flawless!   I had owned and shot guns built by a very good gunsmith before getting Kevin’s gun, but honestly had never owned something that was full custom and built exactly to my specifications.   The gun was incredible.  The attention to detail was astounding.   That same gun resides in my safe today with well over 100,000 rounds through it, and I promise you if you felt the slide/frame fit you would NEVER believe the gun had been shot that much. 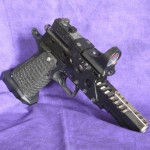 A beautiful compensated pistol built by Toothman. This gun was built for the U.S.P.S.A. Open class and Steel Challenge competitions.

I currently own numerous Toothman guns.   While it make him blush, I can tell you he is literally one of the single best craftsman that I know.  I don’t give this title lightly because the guns that I use not only have to look good, they have to work all of the time.   That’s one thing Kevin specializes in – building 19/2011 guns that both look and fit incredible, but also work 100% of time if you follow simple ammunition reloading, magazine tuning, and cleaning instructions.

Kevin is a Master Gunsmith, and is meticulous about fitting the slides to the frames he builds.  In addition, he is incredibly detailed about making sure that the thumb and  grip safeties (Beavertail) are all molded together and fit and work perfectly in concert.  The slide to barrel fit and lock up make the guns he builds exceptionally accurate, while still remaining reliable.

One thing about Kevin is that he doesn’t really do semi-custom.   I’m not saying he won’t tweak your existing gun, but if you want a full build you will have to do it right.  He’s not going to turn out a semi-custom gun thrown together in two weeks or three weeks.   If you want a Toothman gun you are going to have to wait.  Currently, Kevin estimates he will spend around eight weeks minimum perfecting your gun.

One last thing.   If you want a Toothman, I highly suggest you get it soon.  While Kevin is 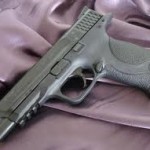 Don’t think Toothman is limited to just full custom 19/2011’s, he also did all of the work on several of my Smith and Wesson M&P’s. There isn’t much he can’t work on!

comfortable in his little shop at USSA, he won’t be building guns forever.  I spoke to Kevin about some of his future projects, and he told he that while he loves what he does, he has been doing it for well over twenty years.   He has a dream of doing some fishing in years to come…..so if you don’t own a “Toothman,” I would strongly recommend getting one now!

If you are interested in learning more about the USSA Custom shop, or Kevin I suggest you call 866-441-USSA (8772) and ask for Kevin or email Kevin directly at (ktprecision@aol.com).  Beware he spends most of his time on machinery, so leave a message with the staff and tell them Mike Seeklander told you to call!   If you end up with a Toothman gun, consider yourself one of the lucky ones!