Key Observations: Anomalies During Student vs. Student Shoot-offs (and why they happen) 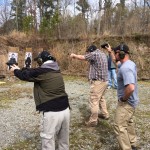 A stress inducing drill will teach you some things about how yourself and potential bad training habits.

“Ready on the left….ready on the right….GUN!!”   As I shouted the commands the shooters drew and engaged their targets.   The winner was clear.   And while the shooting was fun to watch, the interesting things happen after the shooting has ceased.   Read on to hear about the way the mind works under (and after) stress!
More about the shoot-off drill:   The shoot off consisted of two shooters about six yards from the target, and the procedure is on the command students draw and engage their target, and the first person to get a combat effective (high center chest on the target inside the scoring circle) hit wins.   Before the event, the shooters are given very specific instructions on the engagement, that they may fire multiple shots (because the only goal is to get the first combat effective hit), and that I want them to do a post-engagement scan process and holster after their run.   The second VERY 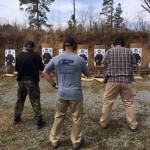 In many of the runs, which pits student against student, the shooters will default to the habits they have written in training, good or bad.

clear instruction after the scan and holster is to remain loaded after their run, regardless if they win or not.   The reason for this is two-fold.  First, I want the students to rotate through the drill several times (hence the remaining loaded), and secondly I want to point out the stress induced actions that occur after their run.   In this case, it is spontaneously unloading the gun even though the entire group is told very clearly and asked  to acknowledge that they understand they are to remain loaded.   One thing that I’ve noticed over dozens of classes that is the same consistent anomaly is that shooters tend to do things completely different or unknown to them under the small or little simulated stress of the shoot off.   My point in giving them very specific instructions prior to the drill is so that I can point out the anomalies as they happen during the drill.

So, on the first run of the day guess what happens?   The shooter on the left finishes the run…..and….unloads their gun (without a scan process)!   I tell the student to remain loaded, and holster.   The second and third groups move to the shooting line and begin the drill upon my commands, and guess what happens several more times?  You guessed it, several of them continue to either unload completely, or go through part of the unloading process.   At that point I stop the group, discuss the rules, and once again tell them the procedures of the event.    Now remember, they have been drilling and going through a post engagement scan process for about a day and a half now, so they understand the concept.   They are also left to shoot through the training drills (prior to the shoot-off) and ONLY after the line looks like everyone is done shooting do I verify that the group is unloaded (they are out of ammo at that point) with the “unload and show clear” command.   So they understand the concept.   So why aren’t they following instructions?   Read on to find out!
Again the next several groups go through the drill and you can probably guess by now what happens…multiple students finish the drill, and UNLOAD their gun!   How can this be?  Are they unruly and disregarding my instructions?   No, they are not.   They are going through a stress induced anomaly that comes out when the brain is reaching for something to do.   At this point in the class I stop the group and point it out, as well as some other observations and mistakes they are making during the drill that NEVER happened during the previous training drills.    The teaching point is clear, stress causes things to happen that you might not predict.  Most of which are caused by the brain searching for something to do.   This is one of the reasons it is so critical to make sure during training to follow a set of logical and effective processes during each repetition of your training drills.   The processes should be designed and to increase your chances of survival in the event of a defensive shooting.   Training these processes must be done consistently during your training drills.  In my classes I see 30 to 50% of the shooters going through this particular drill and automatically start to unload their gun.  Very few shooters have the presence of mind to finish firing and go through a proper scan process and then work their way back to the holster.   Instead, in their amped up state they tend to do a speed unload, or drop the magazine, or even stranger things like locking the slide to the rear for no reason.  At times even when I ask them later why they did what they did, they can’t answer my question.  Sometimes they don’t even realize what happened!
The reason these anomalies happen is because they’re developed in training and become training related  bad habits (scars).   For example, unloading or dropping the magazine after each drill repetition during practice on their own automatically writes that habit into the subconscious.   While I am a big advocate of competition shooting, the automatic unload show clear process done repetitively during competition stages can also become a bad habit for those that cross train in defensive and competition shooting.
Now I’m not saying that unloading the gun while training or during a drill is always a bad thing,  but what I am saying is the unloading process during defensive training is an administrative process and should not be an automatic action after shooting a drill.    In my classes I guide the students to perform the repetitions in the training drill they are doing, and continue to do so until they are completely out of ammunition, or they choose to stop shooting the drill.   IF they choose the latter, then I want them to finish the drill repetition, go through some sort of post engagement scan, and holster.   Then they can switch into administrative mode and choose to unload if they want.   The key is to keep the unloading process from becoming automatic.
I didn’t invent the concept that training habits will appear in real life, as such items have been known for years.   In my past I have heard of training scars that resulted from bad training habits, such as the good ole “brass in the pockets” story.    While I actually did some additional research (as did Caleb Giddings, check out his post about busting the myth here) and could not validate the story, the point is that training habits will carry over to the real world.   In this case, my reference is to the story that police officers shooting revolvers used to routinely put the spent brass from their gun into their pockets so they didn’t have to bend over and pick it up after their qualification or training session.   This habit reportedly emerged during the gunfight,  and the story is that they did the same thing (instinctively) without even knowing they were putting brass in their pockets during the fight for their lives.   While I can’t attest to the truth of this, I have heard it from more than one source and believe that there might be some truth to it.
Another thing that I see you during the shoot off drill is a very high 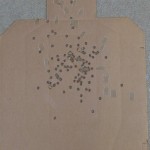 This picture shows shots randomly spaced all over the target, but mostly centered. I see low left hits on most right handed shooters targets because of mechanical errors they are making. The strange thing is that the misses begin to appear high on the target around the neck and over the shoulders during the stress of the shoot off.

percentage of shots on the target that miss the ENTIRE torso.   Even some of the best shooters in the class completely miss, and more than one time.   There is no doubt that this happens simply because everyone in the shoot off is feeling some stress and pressure and they’re all trying to go faster than they have the ability to hit.   That is one of the key points of the drill- simulated stress and forcing the student outside of their comfort zone so they find what their failure points are.  The interesting thing is where they miss.   One of the unique things that I don’t completely understand is that there are much higher percentage of high shots on the target that hit or go over the shoulders as well as higher in the face or neck area than there are low or low left shots.   This is surprising because the most common mistake during almost every single drill prior (in the class) are hits that land either left or low left (for a right handed shooter).   Enter the shoot-off drill and almost every single complete miss or error was high!

I hypothesize that the shots are pre-grip versus post-grip formation mistakes, meaning the student is doing something wrong while they are still trying to build their shooting grip on the handgun at higher speeds.  Because the grip is not completely built on the handgun, and the student fires too early, while the gun is not yet aligned on the target.   I suspect  that the student is probably looking over the top of the gun during these shots, which are almost always the first shots of the string of fire.   I did a quick analysis on the targets in this specific class, and out of ten targets used previously during the drills almost every single one of them showed shooting errors that were directly left or low left.    The targets (two of them) during the shoot-offs showed shooting errors that were predominantly (almost 100%)  high or high left.   Why are students making a different mistake than during the normal drills?  Simply because they are trying to go faster, and those errors come out during that speed and simulated stress.  The key for them is to observe and learn from them!
One last observation, one that is very common during my shoot off drill.  That is the act of “mental failure” after the drill is over.  I normally see this in the newer shooters predominately, but have also seen it in very experienced shooters.    The “mental failure” is simply the act of not knowing what to do, even though the student has been given clear instructions.   Often times after the run, they student simply fumbles for a second not knowing what to do (reload, re-holster, etc.).   The effects of stress on their mind become very apparent when during that timeframe, I am giving them a command and trying to tell them what to do and for several seconds they are very unresponsive.   They simply are not processing the information I am giving them.   Once again, this state is well documented in humans that are under or have been under extreme stress.   The lesson here is to observe and be able to both recognize, and figure out ways to turn that logical, conscious processing back on after the event.   This will allow you to make logical decisions about what to do next!   Training properly will greatly improve this.    In the end, the drill is very effective in teaching the importance of proper practice habits.   If you want to take your training to the next level, try adding stress inducing drills like the one written about here.   I promise you will learn something about yourself!
For a full training program that addresses the mental component of training as well as the physical side, consider my book Your Defensive Handgun Training Program or taking a class, Defensive Handgun Training Program Level 1.
Until Then – Train Hard!
Mike S.

29 Responses to Key Observations: Anomalies During Student vs. Student Shoot-offs (and why they happen)