Home Invasion! Grab The Defensive Rifle- Dead Trigger….What The Hell Do You Do Now??

What the heck is a dead trigger?  Let’s define that term first:  Anytime you pull the trigger and expect it to go bang, and it doesn’t, that is a dead trigger.  If you are in a situation like the one described in the title of this article, it really doesn’t matter why the rifle didn’t go bang, just that you have a response when it does.  The article that follows discusses your options.

Now, if you have a “dead trigger,” it is due to either one of three things: 1. the rifle wasn’t loaded in the first place, 2. the rifle ran out of ammunition, or 3. you have some sort of malfunction.  Common sense would say that if any of these have happened, simply fix the rifle right?   Maybe not.  Read on. 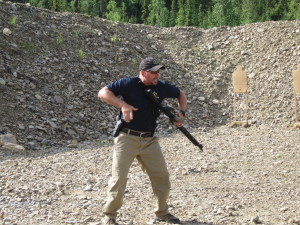 If the rifle stops working, have a plan! The war face is optional.

Before I teach you how to reload your rifle or clear any malfunction, I want to discuss the context of the situation and make you think about a few things. Dealing with a malfunction or emergency reload situation requires that the operator think about and reacts what’s going on.   The common answer might be to perform a reload as quickly as possible, but let’s consider a few things first.   If you happen to be defending your home or maybe you’re a law-enforcement officer and you’re doing a warrant in a house and you’re in a gunfight, when the gun runs empty you’re likely very, very close to the person you’re shooting it out with.

If you break the fight down into time, a full reload with an automatic rifle such as an AR-15 or AK-47 platform is going to take you two seconds or more to perform. Clearing a malfunction will take as long or longer.  If the person you’re shooting at is within at 20 to 30 feet, this means that they can close the distance and make contact with you well before the reload is done.   If they are shooting at you, they can likely shoot 8 or more rounds in those two seconds…all coming right toward your lovely body.  Another consideration is when the gun goes dead (i.e. pull trigger and no bang) you may not know exactly what’s wrong with it. You don’t know if it’s a serious malfunction or possibly if your weapon has been shot and damaged beyond repair.  A damaged rifle is certainly possible, whether it is from being shot or something simply breaks at that moment in time.  I recently broke an extractor on my rifle, and guess what, the rifle becomes a single shot at that time.

Therefore in a situation where you’re at room to yard distance (3-20 yards), I recommend strongly that if you’re armed with a handgun you immediately transition to that handgun.  This guarantees that you will quickly be able to get rounds on target again.   Think about it in terms of time and risk. While a reload with the rifle compared to a transition to the handgun might require very close to the same amount of time, the fact that you have a dead trigger on the rifle does not always mean you can fix it with a reload.   What if that dead trigger signifies a catastrophic bolt override malfunction or something similar? Most rifle malfunctions that cannot be cleared with a tap, rack, bang (or ready) will take much more time to fix.   If the rifle is damaged and shot up as referenced above, then that particular rifle is now a viable club, but not much more.   So the solution is to transition to the handgun if you have one, anytime you have a dead trigger on the rifle.  Don’t think about it, look at the rifle, weigh your options, etc., just make something happen that will save your life!   Dump the rifle and transition to the handgun! Steps to the transition:

Rifle fails to go bang, get it out of the way and use your handgun.

Keep in mind that the handgun is now your primary weapon, so finish the fight with it and then follow your post engagement actions. Consider:

The rifle is now your primary weapon again.

Get the rifle back up and into the fight again!

So let’s assume that the distance is great enough that transitioning to a handgun is not feasible or you don’t have a handgun transition to.   In this case during the fight when the rifle goes dead your options are to fix it by performing a reload or clearing the malfunction. Additionally, let’s say you’re at a very close range and you don’t have a handgun, you might have to initiate some sort of combatives and strike the threat with the rifle. Another option is to use explosive movement to get to a safer spot like a piece of cover, or at a minimum put distance between you and the threat before attempting to reload or clear the malfunction.

Training for the transition requires that you work with a drill that will truly simulate what you want to happen.  Now is where you need to address your own personal situation.  Consider this:

In addition, I recommend NEVER training transition drills by keeping the rifle loaded and “simulating the dead trigger.”  An example I watched was a group of individuals that were practicing the transition by shooting a couple shots, then flipping their safety on, and transitioning to the handgun (the rifle was still loaded).  Two problems with that is that it does not give your brain the proper stimulus to learn (dead trigger), and secondly they were sweeping a loaded rifle out of the way with the potential of having a safety problem if for some reason they failed to get the safety back on.  In that case they would have had a loaded, un-safed rifle hanging off their body pointing wherever.

So practice your transition drill with either the reload option or malfunction option.  To do this:

To get the book!:  Your Defensive Rifle Training Program

And there you have it, the context and thought process behind dealing with a dead trigger on a rifle.  Consider your circumstances and figure out how you are going to handle the problem before it happens to you!

3 Responses to Home Invasion! Grab The Defensive Rifle- Dead Trigger….What The Hell Do You Do Now??