Due to the large amount of people who CANNOT own a good AR/AK system, I thought I would repost the section from my book that addresses this issue.   Enjoy!

This section is reprinted from the book and addresses the manually operated rifle spectrum that might be used for self-defense. The lever action rifle was an incredibly effective fighting tool in the past, and can be used just as effectively today if that is what you possess or are limited to. This chapter contains the keys to training with and shooting your manually operated rifle to a high level of skill.

“Arm yourself with the best tool you can find, but once armed – preparation is the key.”

FOR THOSE WHO HAVE LIMITED OPTIONS

Thus far our discussions have centered on those people who have very few restrictions or limitations in the options available for selecting a home defense rifle. Unfortunately, there are states in our wonderful union who have decided to outright ban or severely restrict the types of firearms available to their citizens for lawful personal use. If you have the unfortunate distinction of residing in one of these states, the information in this book may turn out to have very limited benefit as ownership of the AR-15 rifle may be prohibited for you. For those of you who cannot own an AR-15 rifle, let’s explore some other options for a home defense rifle. 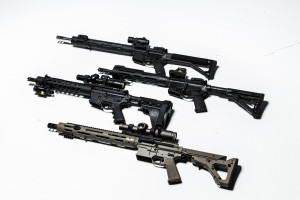 I’m a big fan of a high quality AR type system as a defensive rifle, but some of you might not have this option!

The first and most important step when considering options other than AR-15 rifles is to research your local laws and determine exactly what, if any, types of semi-automatic rifles you can possess. It’s beyond the scope of this book to examine every individual State and make recommendations based on each state’s laws. That burden will fall to you, but do not be discouraged. Many state’s laws are a patchwork of laws similar to the original 1994 Assault Weapons Ban that prohibited certain types of features such as flash suppressors, pistol grips, collapsible stocks, high capacity magazines, and the list goes on. The law also grandfathered firearms manufactured prior to September 13, 1994 as exempt from those regulations. Many state’s adopted the concepts found in this Federal law and created similar state laws. The patchwork of ridiculous laws rarely makes any logical sense and many loopholes exist that allow the citizen to be in compliance with the letter of the law and still effectively own a semi-automatic rifle. The best advice is to check with your local gun store to learn exactly what you are permitted to own and what regulations apply to such ownership. In the event that you reside in a state that has completely banned possession of the AR-15 rifle, let’s look at some out “out of the box” ideas that can still effectively serve as an adequate home defense rifle.

While many laws on the books are written specifically with rifles and rifle calibers in mind, consider researching the laws of your state to identify if Pistol Caliber Carbines (PCC) are legal. Several manufactures offer AR15 style rifles chambered for pistol calibers with 9mm being the most popular.

The JP GMR-13 9mm rifle. An option when standard rifle caliber weapon will not work. The one I have uses Glock 9mm magazines and runs flawlessly.

PCC’s offer every performance and manipulation advantage of the rifle, but in a smaller caliber pistol chambering. Terminal performance of the PCC’s are certainly lacking when compared to rifle calibers, but do not overlook their effectiveness. The increased velocity from the longer rifle length barrels give pistol calibers, magnum or +P terminal performance boosts without the increased case pressure and recoil associated with higher velocity performance ammunition. Most PCC’s have a magazine capacity of 25 rounds or higher and will often use older and widely available, classic submachine gun magazines such as Uzi, Sten, and H&K MP-5 magazines. Many newer designs are built around pistol magazines such as Glock and Beretta magazines. Sig Sauer has recently introduced the new SIG MPX carbine chambered for 9mm, 40 S&W, and .357 Sig, with all of the ergonomics you would expect from a modern design. SIG’s offering is sure to be a dominant success in the often-overlooked PCC market. A well-configured PCC is an excellent choice for a home defense carbine if you live in a state with restrictive laws, don’t overlook this option simply because it’s not chambered for a traditional rifle cartridge.

Yes, we said it, a lever-action rifle – America’s first assault rifle. Yes, the rifle that is in every John Wayne western can be a very effective home defense carbine. First of all, they are usually widely available and not subject to even the most restrictive rifle bans. They are chambered for both rifle and

A short lever action rifle is a great fighting rifle! Simply ask the hundreds of those that have fought and won with one over a hundred years ago!

pistol calibers ranging from the extremely powerful 45-70 down to the mild 38 special. They have magazine capacities that range from 5-6 rifle rounds to 15 rounds or more in their pistol caliber models. They have the capacity to accept scopes and red dot sights in addition to excellent factory rifle sights. They are relatively lightweight, easy to use, and they can be pretty quick to reload with a moderate amount of practice. If you doubt these rifles are serious home defense options, take a few minutes and do a YouTube search for Cowboy Action Shooting. You will see what a properly configured lever-action rifle coupled with a practiced hand can accomplish. Consider a lever-action rifle chambered in 44 Magnum with 12 rounds in the magazine, equipped with a mini-red dot sight and a mounted weapon light. There are very few scenarios where such a setup would be insufficient for home defense. Although the technology may date back to the days of the old west, their effectiveness in a home defense role can still be as modern as ever. 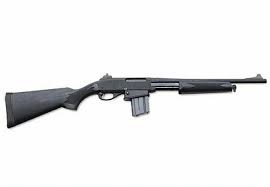 Along with the lever-action rifle, the pump-action rifle is another similar option. The pump-action rifle is usually not subject to any types of bans or restrictions and is widely available, even in the more restrictive states. The pump-action rifle works on the exact same principal as the pump-action shotgun. After a shot is fired, the forward handle is pumped aggressively to the rear until it reaches the limit of its travel and then it is aggressively pumped back forward until the action closes and locks. This motion will eject the spent cartridge and reload a fresh cartridge for use. The action is very fast and easy to operate. For many years Remington has dominated the pump-action rifle market with their model 760 and 7600. Chambered for various popular rifle calibers, the rifles offer four or five round magazine capacities depending upon the caliber chosen. Recently, Remington offered a patrol rifle model 7600, chambered in .223 that uses traditional AR15 style 30 round magazines, although 20 and 10 round AR magazines would also work. Configured with a red dot sight and a rifle mounted light, the pump-action rifle would offer a very effective home defense rifle to those with limited options.

“The greatest battle implement ever devised.” This often quoted remark from General George S. Patton tells it all!

regarding the value of the M1 Garand rifle to the WWII war effort, pretty much sums it up. Chambered for the powerful 30-06 rifle caliber, the M1 Garand is a man’s rifle. Millions were made and the rifle operated around the World in every crappy environment that Mother Nature could create. It’s a battle proven, semi-automatic design that was the basis for M-14/M1A series of rifles chambered in 308. If you’re concerned about its recoil, don’t be. It’s without a doubt the softest shooting 30-06 rifle you will ever shoot. The M1 uses an en-bloc 8-round clip that is loaded through an opening in the top of the upper receiver. The user pushes the clip down into the receiver until it latches and then bumps the bolt handle forward, initiating the loading process. When all 8 rounds have been fired, the bolt locks to the rear and simultaneously ejects the empty clip with a distinctive pinging sound. A quick reload is just another clip away. While the rifle is large and long when compared to modern carbines, it balances well and with practice can be easily maneuvered and manipulated. Relegated to mostly competitive shooting circles, the M1 Garand is a hidden diamond in the rough to those looking for a home defense rifle. The M1 does not feed from a detachable magazine, is uses an en-bloc clip that is contained internally within the receiver. It also does not possess a pistol grip or a flash suppressor. The absence of these features means that this very powerful and capable semi-automatic rifle will most likely have slipped completely past any restrictive laws. While it is true that the rifle is not as adaptable as more modern designs when it comes to the additions of scopes and lights, there are some aftermarket companies offering accessories to fit the M1 Garand. A little Internet research should show you what options are available. The M1 Garand also ranks pretty high on the intimidation scale. Remember Clint Eastwood in the movie Gran Torino? “Get off my Lawn!” If you are not familiar with the scene, YouTube it – it’s worth the look. Although its 80 years old, the M1 Garand is still an extremely effective home defense option for those living in restrictive states. Plenty of German, Japanese, and North Korean soldiers ended up on the wrong end of the M1 and quickly paid the ultimate price. This old soldier has plenty of fight left and should be on anyone’s short list options.

One thing to remember is that “manually” operating your rifle is a key detail you will want to pay attention to in your training drills. What this means is that no matter what you are armed with, the way you manipulate your rifle might make the difference between life and death.   As discussed previously in this document, it is very important that you build proper skills while doing your training drills.   The sequence you should follow with any manually operated rifle is as follows: shoot, operate the action, shoot, operate the action, etc. until the threat has ceased to be a threat. Note that the last step in the process is always to operate the action again so there is a loaded round in the chamber and you have the ability to shoot again if necessary.   The next operation you should consider is loading the gun. I recommend some sort of side-saddle ammunition carrier or pouch that has ten or so additional rounds in it, that allows you to top the rifle off. We work this concept a bunch when operating a shotgun since most shotguns do not hold many rounds.   The sequence might go like this:

As always, quality practice is the key.  Especially if you are armed with a rifle that requires manipulation each time you shoot it.   If you currently own or decide to arm yourself with one of these excellent manually operated rifles, make sure you put the time in.

One Response to A Different Twist On Home Defense – Manually Operated Rifles!